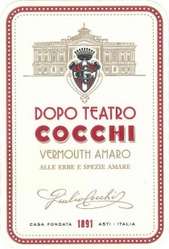 The name ‘Dopo Teatro’ refers to the late-evening, “after theater” service at restaurants and cafes in Torino, a gathering time for a sip of something bittersweet and maybe a small bite to eat. This “vermouth amaro” (vermouth with added bitterness) uses Cocchi’s classic Vermouth di Torino as its base.

From there, winemaker Giulio Bava adds a number of additional botanicals, including chiretta flowers and a unique local gentian. The result is a robust amaro that retains the refreshing acidity of the original vermouth. Pair with spicy chocolate preparations, or mix with intense bourbons or ryes, peated Scotch, mezcal, or gin.

Cocchi has produced wine-based aperitifs and traditional Piemontese sparkling wines since 1891. Since 1978, the company has been owned and operated by the Bava Family, themselves renowned producers of sparkling wine in Monferrato and Langhe. Giulio Cocchi was a young and creative pastry chef from Florence, where he worked in a popular bar located in Piazza del Duomo. In the late nineteenth century he moved to Asti, a small but lively town in northwest Italy, not far from Torino, and established himself as a distiller and winemaker.

His Barolo Chinato, Aperitivo Americano, and vermouths became well known during the Belle Epoque and the Italian Futurist period. By 1913 there were twelve Cocchi tasting bars in Piemonte.

Today the winery maintains its artisan character and follows Giulio’s original recipes to craft the distinctive wines that have made Cocchi a cult name worldwide. In the last 30 years, Cocchi has revived the forgotten wine categories Barolo Chinato and Vermouth di Torino.

On first sip, it has the richness and acidity you’d expect from it having a base of Cocchi Vermouth di Torino. Once the sweetness lifts, you’re left with a slight dry bitterness. Despite the bitterness, it’s not bold like a traditional amaro and it’s certainly not as syrupy. The bitterness from the wormwood and cinchona lingers, asking you to return for another sip.  If enjoying this vermouth amaro by itself is a prerequisite, the logical next steps are subbing it into vermouth cocktails where you’d prefer more complexity and bitterness. The Negroni is a perfect candidate, but here are some others:

Strain into coupe, garnish with an expressed orange peel

Shake. Strain into a cocktail glass.  No garnish