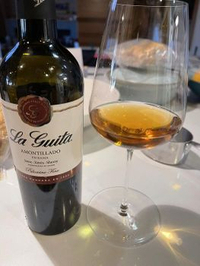 Amontillado is a type of dry sherry made via a multi-step aging process that turns the fortified wine into an amber color and imbues it with a nutty flavor. The name Amontillado means "like Montilla," after the Spanish wine zone of Montilla-Moriles near Andalucía.

While Montilla-Moriles does produce Amontillado-style aged wines, it is not one of the three regions in southern Spain that can legally produce sherry.

Those three regions are Jerez de la Frontera, Sanlúcar de Barrameda, and El Puerto de Santa María. Aged wines made in those regions receive the official Jerez-Xérès-Sherry label (Xérès and “Sherry” are the French and English versions of the Spanish word Jerez, respectively). Jerez and Sanlúcar are particularly known for their high-quality Amontillados.

Amontillado is a very unique wine due to its dual aging process: first under the veil of flor, typical of Fino and Manzanilla, followed by a period in which the flor disappears and the wine is exposed to oxidation. Made from palomino grapes, this fusion of aging processes makes the Amontillado wines extraordinarily complex and intriguing.

There is a wide range of Amontillados, resulting from the different stages that occur between the two aging phases that the wine is made from: biological and oxidative. Thus, some Amontillados have a paler color with very sharp notes and faint memories of yeast, from being aged longer with the flor. In others, however, the notes of oxidative aging - spices and wood - predominate.

Light and smooth in the mouth with well-balanced acidity; both complex and evocative, giving way to a dry finish and lingering aftertaste with a hint of nuts and wood.

Enjoying a bottle of La Guita's Manzanilla en rama (en rama loosely translates as "unfiltered") is as close to a visit to Sanlucar as you can get.  This Amontillado contains the Sanlúcar essence of the mythical La Guita chamomile, with a sharp and saline profile. It has an average age of 15 years under the traditional system of criaderas and soleras, where it has been becoming more intense and complex year after year An essential wine to accompany any lunch or dinner.