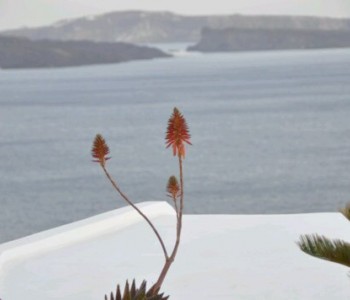 I woke up to a glorious day at 7 a.m.  Seemingly I had already adjusted to European time, and didn’t feel jet lagged at all- the sun was shining and it was already warm.  I looked out of my hotel window to see the Acropolis in the morning light, and folks eating breakfast in the courtyard below.

Ted and I were to meet at 10 a.m. to walk about a bit, so I showered and went downstairs to eat a fabulous breakfast of yogurt, fruit, and a fried farm egg.
Ted and I met up a bit later, and we went on a wonderful walking tour of the Plaka,  a few ancient sites, and the rock where St Paul preached to the Athenians (now how he got from Minnesota to Greece, I still can’t figure out!  Because I don’t think they had airplanes back then.)

Then we toured a funky flea market district, where I took some typically kitschy photos, and we finally ended up in an outdoor coffee bar where I  had a Freddo – an espresso based drink that wasn’t unlike a Frappacino. The cafe was very active, with lots of handsome folks enjoying iced coffees under umbrellas. We enjoyed a relaxed coffee and conversations, and then walked back to the hotel to grab a car to go to the airport to meet up with the rest of our party.

Our group is a small one – Eric, a buyer from a large retail shop in CA, Jimmy, a chef who owns a few restaurants in Chicago, Eric a salesman from a New York distribution house, Doug, my Bay Area salesman, our host Ted, and myself.

We sat at an outdoor bar and got to know each other a bit before hopping on a plane for the short flight to Santorini – the wine trip was starting.

The drive from the airport was short and dramatic Santorini is a volcanic island and the road cuts by the highway revealed a great variation of volcanic soils – from white ash, to red lava, to black basalt, and every combination in between. One side of the island is defined by a caldera – the remnants of a volcano which is now a 340 debgree bay with a small island in the middle. Sort of like Crater Lake but with an open end, at sea level, on the coast. Absolutely stunning!

Our hotel, the Strogili is a series of casitas clinging perilously down a steep hill – each with a patio and a stunning view of the caldera/bay. Our rooms are simple – a rudimentary kitchen, small bathroom, and comfortable bed. I unpacked and got connected to very good wifi, called home to check in.

Doug and I opened a bottle of Assyrtiko and listened to music on the tablet for a few hours before our group assembled to walk to dinner a few minutes away.

The restaurant was situated down the cliff with a stunning view of the caldera. We were joined by Santorini’s best winemaker Paris Sigalas and his charmng wife.

We were regaled with delicacies from the island – crispy tomato fritters, Santorini favas (actually a locally grown grass pea), a wild onion and leek tart, Scorpion fish, lobster, and a very interesting bivalve called “fulkos” which tasted briny with a heavy, pleasant shock of iodine, paired with pickled caper leaves, all washed down with copious amounts of Paris’ white wine.

After a few hours of eating and drinking we sloshed our way back to the hotel for a bit more wine and lots of conversation.

It was after two a.m. before I hit the bed.

Tomorrow – a day with Paris Sigalas and the vineyards of Santorini.