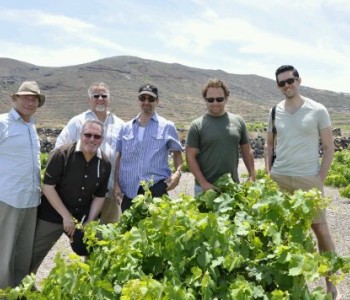 If you were to Google `Santorini wine`, or `Greek White Wine` , chances are you’d come up with an article or a mention of Paris Sigalas – arguably one of the world’s great winemakers and the master of the Assyrtiko grape.

I’d met Mr. Sigalas before in San Francisco, and had a lovely evening with him and Ted Diamantis at my friend Sara Floyd’s home several years ago.    He’s an articulate and passionate ambassador for Greek culture and wine, and today we were spending the day with him in the vineyards and at his winery.

An indigenous grape, Assyrtiko has been cultivated on Santorini for thousands of years, and the island’s volcanic `soils` – an inorganic mix of ash, pumice, and  black and red rock which help to for deliver the wines` characteristic minerality, acidity  and aromatic profile.  Assyrtiko wines are citrusy, aromatic, and bright with a smoky quality that lend themselves to both immediate drinking and extended aging, when the wines take on secondary petrol notes that you’d associate with the Mosel, rather than with Greece.

The grape is cultivated in a traditional and unusual way, growing on the ground, trained to grow in a circular, basket shaped `koulouri` which provides both shelter from the near constant winds , and shade from Santorini’s often hot climate.    The grapes are grown on their original root stock as the dense ash soils are inhospitable  to the Phyloxxera louse that ravaged much of the world’ s vineyards in the 19th century.

Paris has been making wines on the northern part of the island since 1991 – when he started making wine in the basement of his island home.  He built a modern facility in 1998, and has been slowly experimenting, exploring, and raising the quality levels of his wines and grape production on this sleepy island.

He practices organic viticulture, which is easy to do here as the constant prevailing winds and dry climate take care of the rot, mildew and many insect problems that plague other more humid an cooler regions. In addition to Assyrtiko, he grows the white varieties Adani and Athiri, as well as the red Mavrotagano and Mandilaria , making both tablee wines and dessert wines, including Vin Santo, which was invented here on the island thousands of years ago.  (in fact, the island’s original name ~Santo Erini~  gave the famed dessert wine it’s name numberswiki.com

We met at the winery in the morning,and then took a short drive to the vineyards, seeing vines as well as the ancient terraces that he hopes to reopulate with grapevines someday.  (There was a great earthquake on the island in 1954, and most of the population left Santorini, leaving many if not most of the vineyards in disrepair and neglect.  The island’s cultiated grapevine acreage is still a fraction of what it was pre-1950s).

I have been in many vineyards over the years, and seen poor soils before, but i’d seen `soils` quite like this.  It’s hard to believe that anything could grow here!  The secret to the grape’s ability to grow here lie in the pumice stone that makes up a good part of the material in the soils.  The pumice acts as a sponge, soaking up rainwater during the infrequent rains, then giving up the water in dry times.

We walked around several plots, stopping to see his experiments with dense trellising (successful with red wine grapes, not so much with white varietals), looked at some road cuts in order to understand the soils profile better, and then repaired to the winery for an epic tasting and lunch.

There we sampled 18 wines – including older vintages of both single vineyard, regular bottling and barrel aged assyrtikos. I had never tasting older Assyrtiko before, and their similarity to older dry Rieslings cannot be downplayed. These were complex, aromatic gems, that with age, develop a muted dried fruit and smoke character that I’d never quite tasted before!!

Then it was time for lunch – a lovely spread of local, typical dishes: a roasted eggplant with an intense tomato coulis, local fish carpaccio, Santorini Favas, Santorini squash with an avocado tzatziki, a selection of local cured meats and cheeses, all accompanied by copious amounts of Sigalas’ wines.

Then it was back to the hotel for a brief rest, to get ready for a dinner with Mr and Mrs Sigalas at Selene, a michelin starred restaurant that prepares modern re-workings f traditional Santorini fare.

The meal was stunning, creative and well paced, with bold flavors and plenty of Sigalas’ wines, including an `08 Assyrtiko from Magnum.
After the meal, we landed at the local bar, a tiny, friendly smoky place. I left on the early side – at 3:30 a.m.!