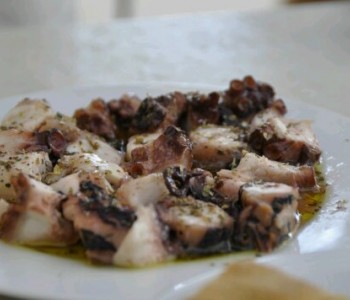 Today was a day of exploring the island a bit and taking it easy.  I woke early, as is my norm,  and had breakfast on my terrace overlooking the sea.
It was considerably cooler today, which was a welcome relief.

The rest in my party assembled slowly, bleary eyed.  I had left the bar well before them last night, and I left at 3:30 a.m!  We piled into the cars at about noon for the drive back to Selene restaurant, where Georgia , the restaurant’s general manager and sommelier was to give us a presentation on the local specialties of Santorini.

Santorini is home to several foods that are unique to the area, and uses some familiar products in unfamiliar ways. They use three parts of the caper plant (buds, berries, and leaves), and the tomatoes that they grow are some of the sweetest I have ever had.

We’ve been sampling them since we arrived, but it was wonderful to have them presented to us with background, context and recipes.

They we drove a few miles to Akoritini, an archeological site, where they had unearthed from the volcanic ash a perfectly preserved Bronze Age town from 1600 BC- 3700 years ago. The site was amazing – they are still uncovering and discovering artifacts. This culture had early multi story buildings, framed windows, a cooling system, and piped hot water….

Then we drove a few miles to the seashore to go to an unassuming local fish restaurant called “The Cave of Nikolas “. Ted ordered some food and a few bottles of Ouzo. He explained to us a bit about Ouzo culture and uses, and we sampled some.

The food started coming out – homier versions of the food we’d been sampling the past few days – favas, tomato fritters, etc, plus some fresh and slightly aged cheese. Ted told who we thought was the waiter that I was a cheesemonger, and he started to tell me how he made the cheese – from sheep and goat milk, how the young cheese was TWO DAYS OLD, while the aged was about four weeks old. Fantastic.

He went on to tell us about the favas grown on his farm, the tomatoes, ditto, the zucchini, ditto. This fellow – who owned the restaurant with his mother, had been working at the place since birth (” I was born here and I will die here – probably with a serving tray in my hand.”), and whose practices – well beyond farm to table or Slow Food, were just they way things were done, the way his family had always done things, the way his children will do things. You just grew and made everything you possibly could.

When Doug asked him about wine, he disappeared and came back with a glass of amber colored stuff. This was amazing stuff — barrel fermented, under flor, co-fermented with Thyme, and aged for about four years in barrel. Oxidative, complex, nutty like a dry Oloroso, with many “Orange wine” notes. Like a slow food, non-hipster version of a Georgian white.

We drove back to the hotel, rested for a few hours and then went out for an early dinner (for Greek standards – 8:30) to a simple and unassuming restaurant in a small village nearby. This restaurant served up all sorts of local specialties – meat oriented this time – braised goat, air dried spicy beef , rustic pork sausage, braised pork shoulder in white wine – plus some local cheeses, as well as typical Santorini specialties.

After dinner we walked a few yards to Paris Sigalas’ cousin’s home for rum and cigars. It needed to be an “early night” because we had a plan to catch n the morning.

The hotel was going to the the airport at 5:30 for our 7 a.m. flight, so it was up at 4:30 in time to be ready for the flight to Thessaloniki to explore Noussia and Nymphion