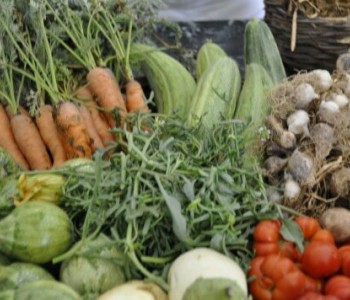 We arrived home late from Sigalas’ cousin’s home – past two a.m., and had to be up and ready by 5.  The winds had been increasing in intensity all day, and by the time i went to bed, they were howling. I was able to fall asleep, but only for  few moments, as the sound of the winds were increasing even more.

I had never heard wind like that, and I thought of that city in Oklanhoma that had just been levelled by a tornado. From what I could hear, the winds were at least 60 miles per hour, with stronger gusts!

I must have dozed off, because my alarm was ringing.  I peeked outside and one of my colleagues was outside – he hadn’t slept either.  In fact, most of our party was working on one hour’s sleep;it was going to be a rough day’s journey to Nympheon.

It was about 200 feet from my room to the parking lot, and in that 90 seconds it took from my door to the van it felt as if I had been sandblasted.  There was small grit in my ears, on my scalp, and probably every explosed place on my body.  I was sure that our plane wouldn;t be able to take off!

But, given that we were on the top of the ridge in the town of Oia,  Santorini, and the airport was at sea level in Thira, and how winds are much stronger at mountain crests than they are at sea level, what was hurrican force at the top, was just very windy – sustaained about 20 miles and hour – at the airport.

Two flights later we were in Naoussa, in northern Greece, at Karydas winery, home of perhaps Greece’s only Grand Cru Xinomavro.  We were met by the Karydas family – Petros the winemaker, and his parents.  Their home and winery are in a modest building situated in front of their small single vineyard (2.5 hectares),

We walked the vineyards and learned a bit about the finicky Xinomavro grape – the fruit has up to five seeds, so picking at phenolic ripeness is important beacuse unripe seed cause an unpleasant green astringency in the wine.

In fact this region is one of the few viticultural regions worldwide to benefit from Global Warming, as the warmer climate over the last six-seven years has allowed the grape to achieve a more uniform ripeness from vintage to vintage.

Unlike the others in my party, I hadn’t tasted the Karydas wine before (they only make one wine);  it was stunning. Muted red berry fruit with grippy tannins – was this Greece’s Barbaresco?  It sure shared a lot of similarities with Nebbiolo, including it’s ability t shine with food, as I was to find out later.

We tasted the current vintage (2009), and then older vintages dating back to 2000.  Man, these were serious wines!

After the tasting and quick tour of the winery, we repaired to a table set under a beautiful spreading walnut tree.  The shade was inviting, as was the spread set before us – meat  and rice-filled Dolmas topped with lemon egg sauce (called ‘Galaxina’), barbecued sausages and pork/vegetable skewers, Greek salad, garlic and dill Tzadziki, fresh homemade bread, and lots of amazing Karydas wines.

The meal was lovely, as was the company, which included a  guest and friend of the family – Stelios Boutari – owner for the famed Kir Yanni winery.  A genial man whose command of colloquial American was soon revealed  (Stelios spent his college years in the US), he reinforced the opinion that the Karydas wines were some of the best in Greece – and the vineyard one of the best in the country.

From there we travelled over the mountains to Florina, in the northwestern most corner of Greece, touching both Albania and the section of the former Yugoslavia that’s now called Skopia or Macedonia.  Florina prefecture is quite mountainous,and beautiful, with lakes, mountain streams, and a great diversity of flora and fauna, but the jewel in the crown of Florina is Nympheon – where many of Greek’s elite keep a second home. The terrain was mountainous, tree covered, with lots of lakes, and the houses are made of local stone with thick walls and tin or slate roofs. The region is home to wildlife preserves – one for bears and the other for wolves.

We were greeted by Ellene, the lovely proprietor of Nymphes (‘Nymphs’ in Greek), a lovingly restored guesthouse in the traditional style of the region.

Now, before you chuckle about the name of the hotel, please understand that Nymphs in Greek mythology were immortal non-gods who were associated with natural or woodland sites. Euridice and Calypso are proobably the two Nymphs that many Americans would probably recognize.

We unpacked, had a cocktail on the terrace, and then piled into the car for the short drive to dinner