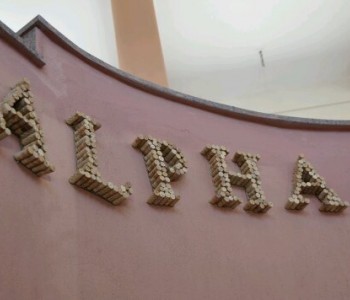 Our dinner destination was Konto Soros in Xino Nero, where the owner chef has lovingly recreated and elevated Florina cuisine to a new gastronomic level.  Our host was the charming Angelos Iatridis, founder and owner of Alpha Winery, makers of world class wine based on traditional Greek and French varietals.

Our dinner lasted three hours, consisting of many  courses, of which the pork loin medallions in small Greek pasta, a local delicacy called Florina peppers,  and the white asparagus stood out.  The wines were copious, including several Alpha reds from Magnum.

Angelos is a charming man with an infectious laugh, and the evening was spent drinking, laughing, taking photos of food and each other and posting them onto social media.

Then it was back to the Nymphes for the night.

In the morning we piled into the van for the drive to Alpha winery in Amygdeon.   Angelos met us at the door, and we piled into cars for a short drive into the vineyards where we walked the rows, as Angelo showed us his state of the art underground watering system, weather stations, and infrared camera ports for second by second monitoring of grape ripeness and stress levels .

Despite his love for high technology, Angelos is at his heart a farmer, and it was really cool to see his menagerie of hybrid boar/pigs. goats, chickens and turkeys.

His winery is equally state of the art – with computer driven and monitored temperature control and electronic monitoring of every aspect of the winemaking process.

Then it was time for a tasting of the Alpha wines – 17 wines – including older vintages of both Alpha red and his 100% Xinomavro.  As I mentioned earlier, Xinomavro can be a finicky grape, prone to astringent green tannins if not managed with care.   Angelo’s approach is to achieve phenolic ripeness and marry it with a judicious, but not overly heavy, dose of French oak.

I had tasted many of Angelo’s wines before – they are all very well made with great acidity, deep fruit and nice length.

After the tasting, we left the winery for a few hours of r’n'r back in Nympheon, including an amazing meze lunch accompanied by lots of Tsipouro – Greek grappa, which went surprisingly well with the food.

Then several of my colleagues and I went on a great hike with Ellene  – a five mile circuit that included rocky outcroppings, vistas of dramatic valleys, lots of aromatic wildflowers, and bears,  several of the close enough to touch, but thankfully separated from us by a few fences.     It was a welcome walk that was both breathtaking and relaxing – a feeling I often get from being out in nature.

Then it was back to the Nymphes Hotel for a few moments of rest before driving out to Florina to a Teverna that specialized in Meze – Greek small plates.   Though not as good as the food we’d had in the Mezeria in Nymphes a few hours before, this was hearty fare, punctuated by lots and lots of yummy alpha wines.