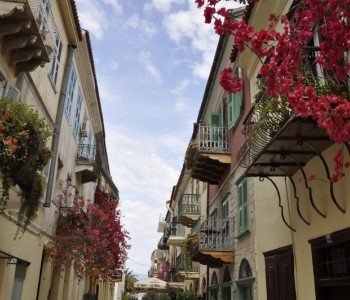 On our way out of town, we stopped at an organic Florina pepper factory and restaurant, run by two brothers who were as passionate about ther products as one can be.  There were peppers stuffed with crisp cabbage, smoked peppers, pickled peppers, pepper flakes, pepper powder, marinated peppers and dried peppers, peppers mixed with tomatoes, peppers mixed with eggplant, sun dried and stewed.   The quality was so wonderful that it was hard to decide what to buy.

The brothers’ restaurant was on the shore of one of Greece’s largest lakes, and we sat out on the terrace and had a lovly , rustic lunch that included some amazingly flavorful Porcini mushrooms, all washed down with some great Alpha Malagousia.

We piled back in the van or the short ride to Thessaloniki Airport, our last internal flight back to Athens airport, where we would start the last portion of our wonderful Greek wine adventure – the Peloponnese and the wines of George Skouras.

We landed in Athens  and found our new van for the relatively short drive to Nafplion, a very charming seaside town, which would be our home base for the next three days.